Benefits, DLA/PIP/ESA ….a mine field!

The blog you have all been longing for!  Quite topical for me, as today I spent 18 minutes listening to the Department of Work and Pensions (DWP) “hold music” and then 7 minutes speaking to an actual human – and even better a human who knew her stuff and was efficient!

Thankfully Heidi has been on Disability Living Allowance (DLA) since she was about 2 months old and changed to Personal Independence payment (PIP) when she turned 25 (should have been when she was 18 but we’ll gloss over that).  Over the years we have used her DLA and PIP for a variety of things – the general extra costs that having a child with a disability entails, but also I have paid someone to take her to an activity or for her to attend events.  (This was before we had Direct Payments to pay staff, it was just an informal arrangement between family or friends).

When she turned 18, we had the delight of hearing all about benefits. thankfully we had a very helpful person at the “Job Shop” explain about which benefits Heidi would be entitled to and the rules accompanying the benefit.

The most important rule is that any savings in the claimant’s name must not exceed £6000.  If they do then the benefit is reduced.  So Heidi bought a few treats and outings with her savings to get below the limit.  The benefit she claims is called Employment and Support Allowance (ESA).  This is paid to people who have a disability or health condition which affects how much you can work.  The claimant must not work more than 16 hours a week or earn more than £143 a week.

The payment is received every 2 weeks and entitles claimants to free prescriptions, dentist treatment, opticians, housing benefit and council tax rebate…so ESA is definitely worth getting.

Your GP will be sent a letter asking for confirmation of the claimant’s disability – this was accepted but repeated 3 months later.  A short note from the GP explaining that “Down’s Syndrome is a life long condition and Heidi would not be losing her extra chromosome any time soon” seemed to satisfy the DWP as her disability has not been queried since.

Of course, claiming ESA involves lots of paperwork and copies of bank statements but unless a change in circumstances happens then it just keeps on coming.  But the £6000 limit on savings is really important – in 2020 I was asked to send in bank statements for the last 4 years for Heidi.  I did so and it was noted that for 3 months in 2017 she had been over the threshold by about £50 and so they penalized her for my misdemeanor in 2020.

I say “my misdemeanor” because about the same time as claiming ESA I became Heidi’s “DWP appointee” which meant that I could speak on her behalf to DWP, housing benefit and banks.  For banks I had to apply separately and get Heidi’s permission for them to speak to me; permission which she was very keen to give as forms/banks/benefits are “boring stuff that mum sorts out”.

Becoming a DWP appointee was a relatively painless process involving a visit from a DWP official who checked my suitability to fill out endless forms and my bank statements to see that I was an honest person.

At the same time as all of this delightful form filling was going on, we opened a bank account for Heidi.  Up until this point, she had only had a building society account.  We tried various ways to limit her spending – contactless payment was one of the first things to be removed!  We settled on two joint accounts for me and Heidi.  One a savings account (not that much saving went on) and one a cash account, Heidi had cards for both of these accounts but only knew the PIN for the cash account.  Each week she had £100 (of her money) paid into her cash account for the next week’s spending, if she spent it all then she learnt the hard way.  I knew the PIN for the savings account and would have given this to Heidi if she was in an emergency situation and needed money.  Thankfully this has never happened.

The advantage of the joint accounts meant that I had access to the money and can do transfers, payments, standing orders and direct debits to help Heidi.  I can also see when Heidi (and now James)  waste their money and need reminding (again) of the right use of their money!  (Budgeting and banking have proved the term “learns things more slowly than others” over and over again)

Since their marriage James and Heidi have got a joint account, which I can access to help them as above.

Next time – moving out! 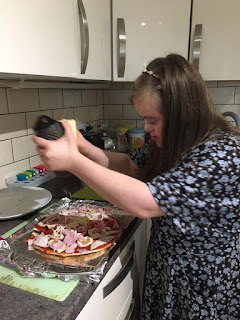